Beginning in 2008, Iowa Health Systems (now known as UnityPoint Health) spent a year tracking kitchen food waste at three hospitals in an effort to reduce the amount going to landfills. The staff was trained to weigh and record information pertaining to discarded food such as the type of food and the reason for disposal.  Food waste was discarded in clear buckets and bags to allow for a visual inspection of the amount and types of food waste entering Iowa landfills. This information was utilized to change purchasing habits and reduce food waste in hospital kitchens through careful monitoring.  In 2008, Iowa Health Systems reduced food waste by 70,273 pounds which equated to a savings of $2,785.47.  By 2011 with the addition of two more hospitals and one medical center to the program, this number had grown to 347,514 pounds of reduced food waste and a savings of $13,196.16. 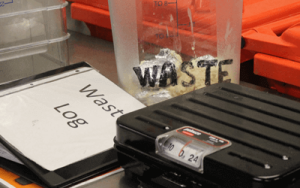 Laura Ippen is the sustainability coordinator at Iowa Health Systems.  Ippen states that the implementation of the program was fairly simple despite the large size of the hospital communities and the amount of food produced.  One of the biggest challenges for Iowa Health Systems was finding a private vendor that could accommodate the hospital’s needs in transporting food waste to a composting facility. Iowa health Systems contracted with GreenRU  to transport their food waste to a composting facility.  Small issues such as food waste bins being too heavy were easily solved with GreenRU by adding carts with wheels. 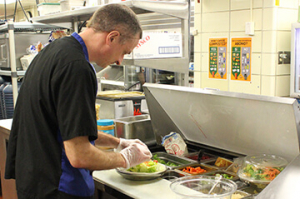 Through a waste audit in 2012, Iowa Health Systems estimated that an additional 135 tons of food waste could be diverted from hospital and medical center cafeterias.  Currently, the goal for 2013 is to include cafeteria food waste in the composting program as well as switching to compostable service and tableware.