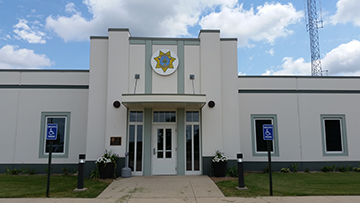 Correctional facilities across the country are taking the initiative to reduce the amount of food wasted on a daily basis. It's not only better for the environment, but it results in lowering disposal costs. Especially for small facilities these costs can be high with the distance needed to transport waste.

In the summer of 2016, Jenny Trent, Environmental Specialist at the Iowa Waste Reduction Center began talking with Ben Anderson, the Deputy and Jail Administrator at the Poweshiek County Jail. With interest in reducing their food waste. a food waste audit and waste sort was scheduled. 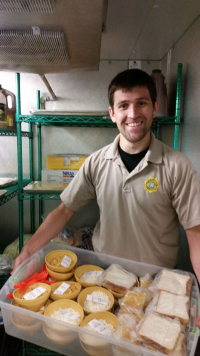 Right away, Trent noticed there were things in place that help the facility keep its food and kitchen waste low. First is that the prepared meals are purchased from a private contractor. This results in less waste at the jail from food preparation because most of that occurs at the contractor's location. Second, food is served on reusable plastic trays along with one plastic reusable fork which means no disposable plates or silverware are discarded.

Daily inmate counts are provided to the food contractor so the number of meals needed daily is accurate, however, inmates can also purchase food items from the jail commissary.

After each meal, any leftover food is thrown away in the garbage so on September 1, 2016, Trent visited the Poweshiek County Jail to conduct the food waste audit and waste sort to get a baseline to begin reduction and diversion efforts.

On that day, 18 inmates were served during the lunch period. Because of the use of the reusable plastic trays and forks, there were no plastics, non-compostables/non-recyclables, or metals in the waste so only food waste was calculated.

Since the number of incarcerated inmates varies from day to day or even from month to month, the amount of food waste generated by Poweshiek County Jail is difficult to estimate on an annual basis. However, based on the waste sort, it is estimated that each inmate has a daily food waste generation rate of 0.4 pounds.

Based on an average of 20 inmates, that equals 2,920 pounds or 1.5 tons of food waste per year that ends up in the landfill. This amount is far lower than the estimates the Grocery Manufacturers Institute and Food Marketing Institute calculated in 2012, however, it is impossible to calculate yearly food waste generation rates due to many variables involved in how many individuals will be incarcerated yearly at the Poweshiek County Jail.