The Iowa Waste Reduction Center (IWRC) received grant funding from the United States Department of Agriculture’s Office of Rural Development to assist K-12 schools throughout rural Iowa. The goal of the project is to help K-12 schools and districts reduce the amount of food waste currently headed to the landfill.

The wide-array of assistance provided by the IWRC includes the following: 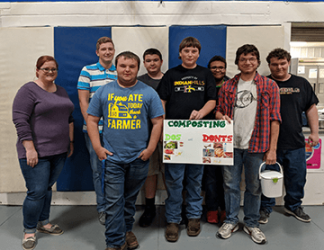 K-12 schools have been eager to learn how much food waste and beverage waste they are sending to the landfill. It varies from school to school and by age range, but by conducting waste sorts to measure different waste streams, then extrapolating the food waste data, K-12 schools can get an estimated snapshot of how much food waste each student in their district is throwing away daily and yearly. This number is much more important to gauge success when implementing strategies than only looking at the tonnage that is tossed by district or school yearly.
The IWRC has worked with some really great students,  teachers, staff, and administration from rural schools and districts all over Iowa. Many of them are already doing amazing things to prevent and reduce food and beverage waste.

Moulton-Udell Community School District was visited by the Iowa Waste Reduction Center to conduct waste audits in the cafeteria and kitchen at the district. Kitchen manager, Trudy Kerby has already implemented many strategies to prevent and reduce food waste. In addition, science teacher Geri Harnisch has implemented a robust recycling operation where students take turns sorting recyclables such as glass, paper, plastic and cardboard into labeled bins and dedicated staff members haul these items to the nearby recycling center. Moreover, family and consumer science teacher Kim Lawson has implemented a food waste composting project with student support. Fresh fruits and vegetables are placed in a bucket after lunch by students. This is then composted in a double barrel composting bin. Moulton-Udell CSD has great staff and teachers that encourage students with a sustainable ideology.

Trudy Kerby stated that almost all left-over foods are re-served and that not much ends up in the garbage. For example, new menu items are offered throughout the year. Trudy, who’s never sure how these new items will be received by students will offer left-overs as an additional option when new items are making an appearance on the menu. She doesn’t worry about how many servings of left-overs are remaining, she just re-serves them hoping they will get eaten up rather than end up in the garbage.

Trudy has also implemented a share table where students can place whole, uneaten, food items that are left on trays at the end of meals. Other students can take these food items if they’d like. Trudy stated that most foods on the share table are consumed and do not end up in the garbage. Left-overs only make it to the garbage on Fridays when salad bar items will not remain fresh through the weekend. 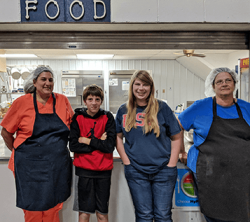 RESULTS OF WASTE AUDITS AT THE DISTRICT

The IWRC has conducted over 30 waste audits at K-12 schools throughout Iowa and has found the extrapolated average is 0.3 pounds of food waste that students toss after lunch. This does not include food waste after breakfast or any beverage waste. South Central Calhoun Community School District district as a whole is doing better than the IWRC’s extrapolated average of 0.3 pounds tossed by each student after lunch. Students in this district are tossing less at 0.2 pounds of food waste after lunch.

While the school district already has a handle on strategies that work to prevent and reduce food waste, there are other techniques that can also help including the following:

The project is in full swing through September, 2018. Once the project concludes, the IWRC will continue to offer assistance to any K-12 school or district in Iowa that is interested in preventing and reducing food waste. “It’s been an absolute delight working with so many kids eager to learn more about food waste! And I feel like we are tipping the scale in our state!” stated Jenny Trent who has been conducting on-site assistance to help entities prevent and reduce food waste for the last 6 years.