Chariton, Iowa was selected as one of four communities in Iowa to participate in in the Food Waste Reduction Assistance Project for Iowa Rural Communities. As part of the project, both residents and businesses within Chariton have access to many free services and supplies that will help prevent and reduce food waste through a Rural Development grant from the United States Department of Agriculture.

The City of Chariton, located in Southern Iowa, is the county seat of Lucas County. With a population of 4,191 in 2016 (United States Census Bureau), this rural community has a "home-town" feel and friendliness that beckons visitors to feel welcomed. People in Chariton were very receptive to services provided by the project and excitedly signed on to participate. 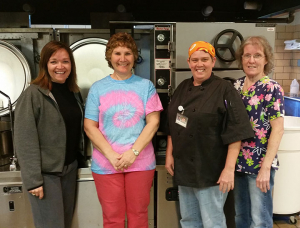 The Iowa Waste Reduction Center contacted Becca Bittner, Food Service Director for all four schools within the Chariton Community School District (Chariton CSD) which include Columbus Elementary, Van Allen Elementary, Chariton Middle School, and Chariton High School. With Bittner's assistance, four cafeteria waste audits were conducted at each school in early May 2017. Food waste from all four kitchens was measured as well as breakfast and lunch post-consumer food waste generated by the students. Students at each school were expected to sort materials left on their trays after each meal into corresponding, labeled garbage bins. Each category was then weighed and recorded. Categories of waste that were separated included the following: 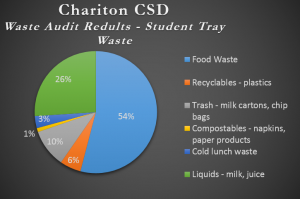 Results of the waste audits indicate the district generates an average of 66.4 pounds of kitchen prep waste including fruit and vegetable peelings and trimmings, leftover prepared foods, and foods that have expired. If Chariton CSD generates 66.4 pounds of food waste daily from the kitchens, extrapolation of this number indicates the school district generates 11,952 pounds (six tons) of food waste from the kitchens yearly. Student food waste from trays after both breakfast and lunch was also measured at each school. The waste Iowa Waste Reduction Center sort required students to place uneaten, unopened items on a table to be counted. Students set aside 43 cartons of milk, 25 servings of juice, 18 apples, 43 oranges, and 26 bananas. All of this typically ends up in the garbage to be tossed in the landfill.

During the waste audit, the IWRC determined that food waste accounted for 54% of all waste while milk and juice accounted for 26%. The remaining 20% included recyclables, compostables, cold lunch waste and trash. The district as a whole generates a total average of 229 pounds of food waste from students' trays daily. Yearly, that figure, when extrapolated, jumps to 41,220 pounds or 20 tons of food waste landfilled. Each student in the district tosses a yearly average of 59 pounds of food after breakfast and lunch.

During four days of waste sorts, the IWRC made recommendations to prevent and reduce food waste and also included these in a final report to the school district. The recommendations are cost effective and simple to implement and include strategies such as recess before lunch, longer lunch times, and implementing a share table. Motivated to reduce food waste generated at the schools, Bittner had stated that she would be implementing a share table in each cafeteria. 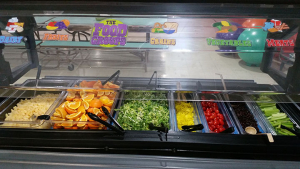 Share tables are places set aside in the cafeteria where students can set uneaten, unopened foods for reuse and/or donation. Staff, teachers, and students can help themselves to the items during breakfast and lunch. Another use of this food is to take it to sports practices after school, or to a local soup kitchen or food pantry to be distributed to people struggling to buy groceries. Either way, this will help reduce food waste and has the potential to alleviate hunger in the community.

As mentioned above, another recommendation shared with Chariton CSD would be to schedule recess before lunch. This allows students to get out excess energy first so lunch is more relaxed and students can more easily focus on eating, without the excitement of wanting to go play outside. Also, the physical activity during recess stimulates appetites.

The school district could also extend lunchtime, allow students to help plan the menu, and give menu items interesting names that will attract student to the items. For example, orange slices could be called "orange sunny smiles," while corn could be called "nuggets of Iowa gold." Even having a student contest to name menu items is a great idea to get kids interested in their meals and eating.

Chariton CSD and the four schools that were provided assistance through the Food Waste Reduction Assistance Project for Iowa Rural Communities were eager to learn more about their own food waste generation rates and techniques that work to prevent and reduce it. Likewise, residents of Chariton were also provided assistance to prevent and reduce food waste. The Iowa Waste Reduction Center contacted Nancy Warren, organizer and manager of the community's farmers market. With an invitation to set up a table at the Chariton Farmers Market, outreach to residents of the community was met with welcoming interest. 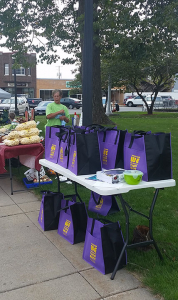 The Iowa Waste Reduction Center set up a table lined with toolkits in August of 2017 at the farmers market on the lawn of the Lucas County Courthouse. The toolkits were free to Chariton residents and contained a digital kitchen scale, a reusable lidded soup mug to weigh food waste, guides to composting at home, a list of strategies to reduce food waste, information about the project, and instructions to weigh, record, and track food waste with a request to send tracking data to the Iowa Waste Reduction Center, all conveniently packaged in a reusable shopping tote. Additionally, the toolkits emphasized implementing the Environmental Protection Agency's Food: Too Good to Waste strategies to help alleviate food waste and costs associated with throwing purchased food in the garbage. 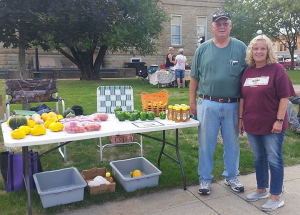 In all, 20 residents received free toolkits to assist in reducing food waste at home, but over 30 people visited the table to find out more about the project. Residents were interested in the social, environmental, and economic impacts of food waste with an emphasis on donating food to those in need. Nancy and Dick Warren, Managers of the Chariton Farmers Market, ended up being the most valuable contacts and served as liaisons between the Iowa Waste Reduction Center and the residents of Chariton. Through them, other contacts were made and the project provided an awareness about food waste that was lacking in the community. Their support and enthusiasm for the project created an avenue for success in promoting food waste prevention and reduction services to the community.