The City of Lamoni was selected as one of four communities in Iowa to participate in the Food Waste Reduction Assistance Project for Iowa Rural Communities. As part of the project, residents, as well as businesses and institutions, within Lamoni had access to many free services and supplies that will help prevent and reduce food waste through a Rural Development grant from the United States Department of Agriculture.

Located amidst southern Iowa’s gently rolling hills, Lamoni has a diverse population influenced by local Amish culture. With a population of 2,354 in 2016 according to the United States Census Bureau, the community’s participation in the project was facilitated by Jen Abraham-White, the Sustainability Coordinator at Graceland University.

The Iowa Waste Reduction Center (IWRC) was invited by Abraham-White to attend the Food Citizen Symposium in April 2017 at Graceland University to connect with local Lamoni residents. During the symposium, residents attending the event were provided with the necessary tools to track food waste at home including a digital kitchen scale, tracking sheets, home composting guides, and the U.S. Environmental Protection Agency’s (EPA) Food: Too Good to Waste strategies to prevent and reduce food waste. In all, 20 residents agreed to track food waste at home for two weeks, then implement EPA’s Food: Too Good to Waste strategies while continuing to track food waste for an additional two weeks. Tracking food waste at home is a great way to visualize how much food is being tossed and creates awareness that can spur behavior change – to prevent and reduce food waste and ultimately save money. 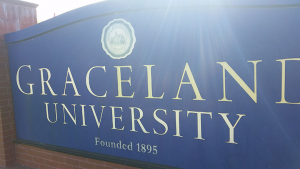 Not only did residents of Lamoni participate in the Food Waste Reduction Assistance Project for Iowa Rural Communities, but Graceland University also participated in the project. A waste audit was conducted in October 2017 at the Floyd M McDowell Commons, a dining center on campus. In one day, 811 students, staff, and visitors ate at the dining center and tossed a combined total of 140 pounds of food and 130 pounds of beverages during breakfast, lunch, and dinner. Meanwhile, the kitchen at the commons tossed 114 pounds of fruit and vegetable trimmings, prepared foods, expired foods and prepared coffee. Combining all the food waste generated at the commons (excluding beverages) at Graceland University including food waste from students’ trays and both prepared foods and fruit and vegetable trimmings that are tossed, it can be estimated that the commons at Graceland University generates 251.5 pounds daily or 49,294 pounds yearly, which equals about 25 tons. Furthermore, students tossed an average of 0.17 pounds of food waste per day, which is far below levels reported in a 2002 study that found Massachusetts students at colleges and universities waste an average of 0.35 pounds per student per meal (Draper and Lennon).

Fortunately, Abraham-White already works with many students on sustainable projects to promote environmental initiatives that are important to the university so moving forward with reducing food waste falls right in line with their efforts. One method that was shared by the IWRC was the option of donating food that is still edible to pantries and/or shelters in the community. In the case of Graceland University, focusing on the prepared foods that are currently just thrown away is an interest. According to United States Census Bureau estimates in 2015, 23% of residents in Lamoni live in poverty, so diverting this food to feed those in need would greatly benefit the community 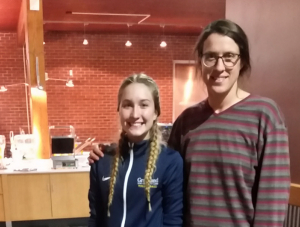 Students at Graceland University have already begun initiatives to implement this kind of program. Through the Campus Kitchens Project, universities across the country work with dining services and student leaders at their university to recycle food, provide meals, educate and engage with the community, and provide leadership opportunities for students. Graceland University was recently part of a competition to become the Next Campus Kitchen but unfortunately came in second; the competition would have provided $5,000 which the university would have used to purchase the needed storage to keep prepared foods fresh as well as the opportunity to serve a community meal once or twice a week. Fortunately, they are not discouraged though and will continue to look for funding opportunities.

Another strategy discussed between IWRC and Abraham-White was composting. Abraham-White stated composting on campus will need to be done utilizing in-vessel technology to prevent odor issues and animal problems. In-vessel composting is done inside a closed container and eliminates the opportunity for wildlife to access food waste and also keeps odors associated with composting at a minimum. While the steep price of in-vessel technology is a pretty big barrier, the university would see a reduction in tipping and hauling fees associated with landfilling food waste. Furthermore, resulting compost could be used on campus to enhance landscaping reducing the need and cost of traditional fertilizers. The fact remains, Abraham-White will need grant funding to purchase such equipment to divert the university’s food waste from the landfill and will continue to seek such funding opportunities. 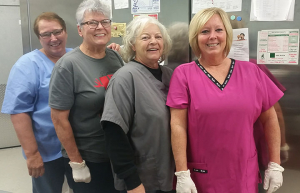 Lamoni Community Schools also participated in the project and as a result, a waste audit was conducted in the fall of 2017. Lamoni Community Schools are already doing great things to prevent and reduce food waste headed to the landfill. Students are required to sort their trays after meals. Left-over milk and juice are dumped down the drain rather than in the garbage and left-over edible foods and beverages that have not been opened or consumed are placed on a share table to be reused. These simple techniques are diverting food from the landfill and are being used as intended – as nutritional food.

During the waste audit, items from students’ trays after breakfast and lunch were measured and included food waste, recyclables, trash, and liquids. In total, on the day of the waste audit, 42 pounds of food was disposed in the trash by 329 students. Analyzing the data, each student tosses an average of 0.15 pounds of food daily. During the last four years, the Iowa Waste Reduction Center has conducted numerous waste audits at K-12 schools and has found that students in Iowa throw away an average of 0.4 pounds of food during lunch. Students at Lamoni Community Schools throw away far less than that during both breakfast and lunch. Just implementing a share table and pouring liquids down the drain makes a big difference in the amount of food and beverages that end up in Iowa landfills.