Beginning in 2011, Regina Catholic Education Center in Iowa City began recycling and composting programs in their school. With big help from students and staff, the program has been a success. As reported in the Catholic Messenger, parent Missy Aitchison states that, “Regina has been sending about 97 gallons of organic waste per day to the recycling center for composting” (Klosterman 2011). The cafeteria now has separate containers for recycling, organic waste, and trash to make it easy for students to sort their waste. Once an organic waste load is ready, Johnson Country Refuse transports it to the Iowa City Landfill and Recycling Center where it is turned into compost (Klosterman 2011). 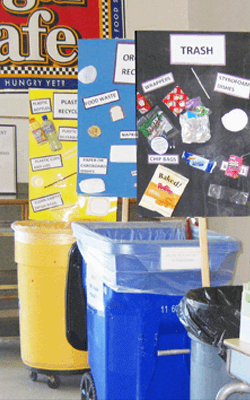 Since the start, Regina Catholic Education Center has made many changes to improve the program. To make the sorting process easier, they added another disposal line in the cafeteria. Signs have been posted around the have been added in the lunch room to encourage students to recycle. Even with separate bins and signs, students still had a hard time sorting their waste, so parent volunteers help students with sorting during lunchtime (Aitchison 2012).  While many issues during the start of this program have been fixed, the staff wants more environmentally-friendly packaging in the lunch room kitchen. Many foods are pre-packaged in non-biodegradable materials. With a small kitchen staff and a large number of students to feed, the pre-packaged foods are necessary to feed all the students. While some packaging has been a problem, recycling the large metal cans and plastics from the kitchen has cut down on trash. Overall, the program was collecting and recycling more plastics than originally thought.  For this reason, two more 96-gallon bins were added in the lunch room.  These are emptied a few times a week (Aitchison 2012).  The collection of organic waste, plastics, metal, cardboard, and paper produced 39,604 gallons from August to December, 2011 (Aitchison 2012)  All the recyclable materials were taken to recycling centers while the organic waste was utilized for compost. The program will be monitored to see if more changes are needed, but the students, staff, and volunteers at Regina have done an outstanding job with the composting and recycling program thus far.

Within one school year, trash collection costs "decreased from $563.75/month last school year to $403/month this school year" due to fewer trash pickups (Aitchison 2012).  Before beginning this program, Regina needed trash collection five times per week. With the new recycling and compost programs, they now only collect trash three times per week. The increase in recycling has diverted a large amount of waste from ending up in the landfill, as well as lowering hauling fees for Regina (Aitchison 2012).

Besides the benefit of lower trash hauling fees and sewer costs, composting has many environmental advantages to the community. The Iowa Department of Natural Resources estimates that upwards of 14.8% of municipal solid waste in Iowa landfills is food waste. By reducing the amount of food waste entering the landfills, valuable landfill space is saved. In addition to diverting waste, composting reduces harmful greenhouse gas emissions, such as methane. This is accomplished by decreasing the amount of buried organic waste in landfills.

In Regina Catholic Education Center's efforts to help the environment, they are teaching valuable lessons to their students and staff involved in this project. Students, staff, and parents learn more about recycling and composting as well as why these practices are so important in the community. Students will hopefully take these lessons with them beyond their education at Regina, and continue to practice recycling and composting on their own in the future.