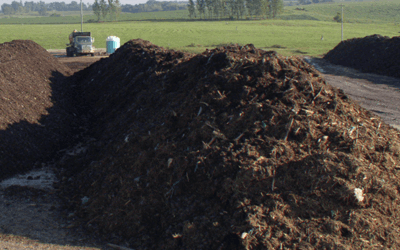 Food waste makes up about 15% of materials disposed of at the Iowa City Landfill, or about 18,000 tons per year. In the landfill, food waste decomposes anaerobically and accounts for a significant portion of landfill gas that is produced. Landfill gas is primarily methane and is a greenhouse gas about 21 times more destructive than carbon dioxide.

The Iowa City Landfill and Recycling Center is one of a handful of landfills in Iowa that also accepts food waste for composting. This program began in 2007 as a feasibility study for a University of Iowa undergraduate engineering class.  After the study, the student group who undertook the study requested that the City of Iowa City and the University of Iowa do a pilot project to see what could be done to reduce food waste in the landfill. A plan was outlined for a pilot project; in the fall of 2007 the University of Iowa’s Hillcrest Market Place dining facility successfully collected 29 tons of pre-consumer food waste from their facility.  The materials were transported to the landfill’s commercial composting facility and composted.

The pilot project was considered a success; the University continued the program as a permanent waste reduction effort and the landfill began to take steps to amend the landfill permit.  This allowed the landfill to be able to accept more than two tons per week of food waste for composting. The permit amendment was completed in 2009 and landfill staff began outreach to increase the amount of food waste accepted; other entities have slowly been added to the program. Staff encourages higher and better use of organics based on the Environmental Protection Agency’s hierarchy for food waste. 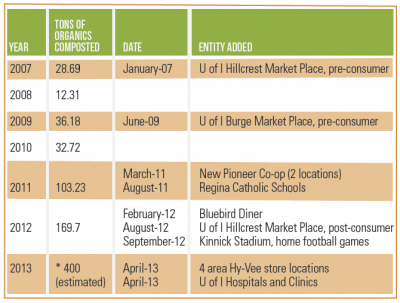 To the right is an annual breakdown of tonnage as well as notes on when new partners joined the program. As of April 2013, the landfill was at about 25% capacity of its permitted allowance for food waste composting, which is limited to 10 tons per day.  Landfill staff works closely with the haulers who offer the service of collecting organics.  It is important to make sure that contamination levels are as close to zero as possible. Staff also works with several organizations in the community which do collections at community events, such as Summer of the Arts. Collecting organics for composting at these events pose specific challenges but are extremely valuable in that they reach a large number of people.