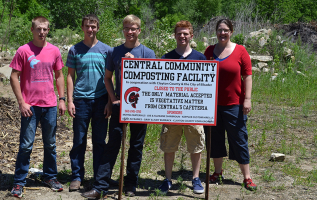 One of the Central Community School's activities is the Central Green Team, a group of students working to make a difference in the environment we live in. In the spring of 2015, the club started a compost pile under the direction of science teacher, Ann Gritzner. Students collected both kitchen scraps, napkins, and food waste coming from student's trays and began a small composting operation behind the school.

In Gritzner's Global Science class, she challenges high school students to tackle a project to promote environmentally sustainable practices. For the 2015-2016 school year, five of her students decided to tackle the school's food waste working alongside the Central Green Team.

At this time, the composting site was located on the banks of the Turkey River directly behind the school. Students turned the compost daily but began to notice some problems. The food waste wasn't breaking down, the piles were cold and they were fast running out of room. 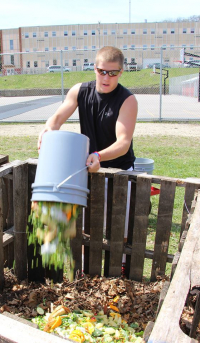 To get help, the students called the Iowa Waste Reduction Center at the University of Northern Iowa for advice. Jenny Trent, an environmental specialist at the IWRC and the resident compost expert, visited the site and made numerous recommendations.

First, the pile needed to be moved away from the river so no leachate can enter the surface water, which is required through Iowa regulations. And the reason the piles were cold was because they were much too small to maintain heat during Iowa winter months so Trent recommended creating one big pile rather than six smaller ones. The students took this advice and ran with the project.

With solutions to those problems in place, the next step was figuring out how to move the compost pile away from the river in order to meet the regulations. The students learned the City of Elkader had a yard waste drop-off site not far from the school and the site met most of the Iowa regulation compost operation siting requirements.

So Gritzner's students presented in front of the Clayton County Engineer and the Elkader City Manager asking permission to move the compost operation off school premises and onto Elkader's yard waste burn site. The land is owned by Clayton County, maintained by the City of Elkader and is located away from residents, yet close to the school. The students got the green light from both, so now they needed to focus on how to manage the compost operation, transport the food waste, where to find reliable carbon feedstocks, and how to follow the regulations. But they were up to the challenge.

With the biggest hurdle of finding a new site checked off their list, now they had to fix the other issues. First, a compacted granular aggregate base layer needed to be laid to prevent leachate from percolating into the ground, luckily the students were able to get this material donated by a local company.

Second, the students had to find a carbon source. With Elkader being a rural community surrounded by farms, the students were able to connect with a local farmer to donate baled corn stalks as a renewable carbon source. Plus, because they decided to use corn stalks as their carbon source, the Iowa Corn Growers Association awarded them a $500 grant.  Next, the students had to find a method to mix the food waste with their carbon source. Without a windrow turner and pitchforks being much too arduous and time-consuming, Gritzner's students went for a tour of the Maharishi University of Management's (MUM) compost operation in Fairfield, Iowa where they were able to see a manure spreader in action. At MUM, the spreader mixes carbon and food waste inside the spreader and spits it out the back into a pile, perfectly mixed. 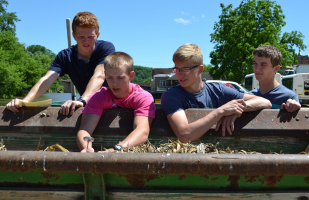 Because the students would be composting less than two tons of food waste per week no permit would be required under Iowa Administrative Code Chapter 567. Other requirements do apply, though. First, an initial notification needed to be submitted to the Iowa Department of Natural Resources (IDNR) letting them know the students were planning to start a compost operation. Along with the notification, siting requirements and signage is required as well as yearly reporting.

The submitted notification led to a site inspection by the IDNR. The students prepared for the visit and filled the manure spreader by layering their corn stalks with food waste. During the site inspection, the students turned on the spreader for the first time at the new site and were amazed at how efficient the old manure spreader was at mixing and depositing the compost into one large pile. With approval from IDNR, the students ordered a custom-made sign for their site and were able to start composting both plate and kitchen waste from the Central Community School.