The IWRC has focused on waste reduction since the beginning but our emphasis on food waste reduction was triggered by a couple of reports. First, in September 2011, the Iowa Department of Natural Resources released the 2011 Iowa Statewide Waste Characterization Study which noted that the number one category for municipal solid waste in Iowa was food waste. Then less than a year later, the National Resources Defense Council released a paper emphasizing that America wastes 40% of its food from farm to fork to landfill. Both of these reports showcased the mounting problem we were facing in regards to food waste.

We quickly developed a fundamental conclusion that seemed to have been forgotten – food should be a resource, not a waste.

To tackle the problem, we first needed to understand food waste in Iowa. Where was it coming from? Why was so much being wasted? What barriers existed that keep us from reducing it in the first place? What methods were already in place to divert it from the landfill? 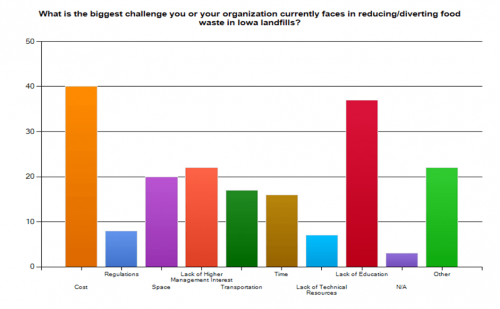 In 2012, we were awarded an Iowa Department of Natural Resources Solid Waste Alternatives Program grant to answer these questions. The goal of the year-long project was to develop resources, host workshops, create awareness of the problem, and determine why so much food was being wasted and what needed to be done. 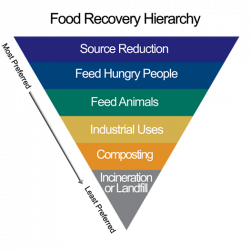 We talked with many people across Iowa to gain an insight into what was being done and followed the EPA’s Food Recovery Hierarchy along the way. By hosting workshops we were able to meet with businesses, organizations and the general public to learn more about food waste in its entire process, from waste reduction to alternative uses, to the last resort, the landfill.

We also worked with Strategic Marketing Services at the University of Northern Iowa to conduct research specifically focused on landfills and large food users. Through this we learned that one of the biggest barriers was education and specifically from the landfills, the biggest hurdle was costs and lack of resources. You can view the rest of the data from this research here.

During this initial phase of our work, we created a food waste section for our website. We filled it with regulatory information, vendor lists, case studies, an outlet map and general resources.

This project built the foundation for our food waste reduction efforts and as the initial grant project concluded in September 2013, two more began.

Where It Comes From

Then a six-month contract with the Iowa DNR started in January 2015 which allowed the IWRC to take its research to an entirely new level by creating the Industrial Commercial and Institutional (ICI) Food Waste Generator Study. Working with SMS again, the IWRC identified Iowa’s ICI food waste generators (12,367 of them), documented generation characteristics and calculated food waste generation rates. This information was then imported into a geographic information system (GIS) allowing users to manipulate and analyze the data using a geographical perspective.

A Focus on Compost

While simultaneously working on the ICI project, IWRC staff also began work on a grant from the United States Department of Agriculture’s Rural Utilities Service, this time focused on the compost aspect of food waste. In this year-long project, the IWRC focused on providing technical assistance and on-site training, while also developing resources for the general public and landfills in relation to compost.

During this timeframe, IWRC also expanded its knowledge base of compost. One of our environmental specialists received a compost certification from the U.S. Composting Council and we hosted the first food waste compost training on the University of Northern Iowa campus. Composting expert, Robert Rynk, joined us from New York to share composting insight at the day-long workshop.

In late 2015, a group was developed to tackle the issue at a statewide level by collaboratively developing comprehensive strategies and recommendations to reduce food waste and divert it from Iowa landfills. Advocates from many industries and focuses have come together as the Iowa Food Waste Stakeholder Coalition.

In an effort to continue education and awareness for food recovery, the IWRC has become involved in the U.S. EPA's Food Recovery Challenge. There are two options for involvement - participant and endorser. IWRC is an endorser because we do not generate wasted food, but instead provide education and resources to others to reduce their food waste.

From September 2015-October 2016, IWRC implemented a project funded by the Rural Utilities Service of the United States Department of Agriculture. It allowed the IWRC to provide free on-site, hands-on technical assistance to Iowa food waste generators in select rural counties of Iowa. Multiple types of assistance were made available to entities in the selected counties. More information on the outcomes and materials from this project can be found on the Rural Iowa Food Waste Reduction Project page.

Following up that project, another project funded by the USDA's RUS began in October 2016. This project will allow the IWRC to provide community-level food waste reduction assistance to four Iowa rural communities. Information about the four communities will be updated on the Iowa Rural Communities Food Waste Reduction Project webpage on a continual basis until September 2017 when the project concludes.

Stretching Outside the Iowa Borders

Ever since we started the food waste reduction research in 2012, our staff has attended and been involved in numerous food waste recovery conferences and meetings throughout the country but never here in the Midwest. And typically the events are focused on one industry sector or one recovery option. The Midwest Food Recovery Summit not only brings this type of event to our area for the first time, but it focuses on the entire food recovery hierarchy. So we decided to bring an event to the Midwest.

The Midwest Food Recovery Summit was on September 6-8, 2017 in Des Moines, Iowa. The summit provided the education, insight and connections needed to help ensure food is used as it's meant to be - as a resource. Focusing on all sources and all uses from source reduction and donation to feeding animals, industrial uses and compost. Speakers from all over the country showcased what's working and what still needs work.