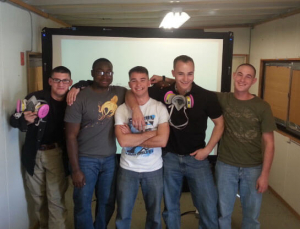 At over 7,000 miles away from STAR4D's facility in Iowa, Camp Kinser is currently STAR4D's farthest satellite site from the Cedar Falls training facility. The base is located in Okinawa, Japan and currently home to the 3rd Marine Logistics Group.

Painters from Camp Kinser first attended STAR4D training during the summer of 2008. However, because of the distance, it was not probable for more painters to travel to Iowa for training. This made becoming a satellite site the best option for Camp Kinser.

Throughout 2011 and 2012, Camp Kinser began the process to become a STAR4D satellite site. Painters attended instructor certification in May 2011, training equipment was sent from Iowa to Japan, the manuals were translated into Japanese, the training spray booth was assembled, and then in May 2012, the first training course was held certifying six painters.