We are excited to welcome Keg Creek Brewing Co., out of Glenwood, IA, to the ranks of the Iowa Green Brewery Certification. 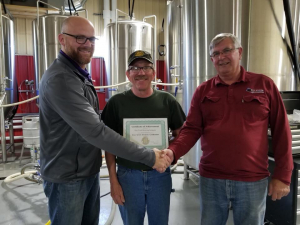 The team at Keg Creek including Art Renze, John Bueltel, and Randy Romens were awarded silver certification earlier this month.

“It was November 2016 when we first visited Keg Creek and they had just received approval by the state to begin brewing,” explains Joe Bolick, project manager for the certification program. With the building being brand new, many features were already in place to give them a jump start in the certification process. The IWRC then worked with Renze, Bueltel and Romens to help them complete their environmental plan and the other application environmental compliance forms that are required for certification.

From there, they were able to bump up to the silver level with a handful of initiatives such as LED lighting throughout, implementing water conservation practices, sending spent grains to a local farmer rather than the landfill, and even procuring some locally sourced hops.

“It makes it easy when you get to work with people like the gentlemen down at Keg Creek. During their expansion, they genuinely thought about the local and environmental impact of all their decisions.” continues Bolick.

Keg Creek Brewing Co. joins Lark Brewing (Waterloo) and SingleSpeed Brewing (Cedar Falls) at the silver level, with Franklin Street Brewing Company (Manchester) at gold, and SingleSpeed Brewing (Waterloo) at platinum in the award-winning certification program. The certification program, nearing its one year anniversary, works with Iowa craft breweries to not only help them comply with environmental regulations but to go above and beyond to ensure their production is as efficient and environmentally-friendly as possible.

Congratulations to the team at Keg Creek and welcome to the Iowa Green Brewery Certification program!

You can learn more about the Iowa Green Brewery Certification here and talk with us directly at i-Best, taking place November 4, 2017 at Worth Brewing Company in Northwood, IA.

Click here for other posts about: Iowa Green Brewery Certification