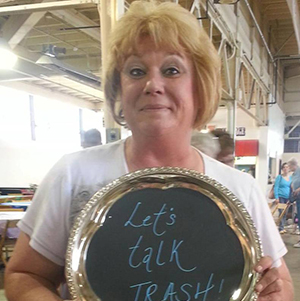 Shelene (Shelly) Codner, serves as the Area Resource Specialist for the Iowa Department of Natural Resources Financial and Business Assistance group for 12 Iowa Counties along the I-35 Corridor. Prior to that, she served as Recycling Education Coordinator, Recycling Market Coordinator and Director of the Butler County Solid Waste Commission.

She is an award-winning technical writer, whose reports and articles have appeared in several national publications, including Iowa Outdoors, BioCycle, In-Business, Land and Water, Erosion Control, Recycling Today and a host of others. She is a published children’s author. Her book “If I Were A Little Guy” was written in honor of her father who died of pancreatic cancer in 2004. All proceeds from this book are donated to various children’s cancer organizations throughout the United States.

Shelly lives on a farm in rural Iowa and is a Master Gardener, serves as a volunteer regional editor for Green Teacher Magazine, based in Toronto and has served as managing editor of the Iowa Recycling Association's school publication, 4R's and their membership publication I!Recycle. She has also served as an AmeriCorps member and AmeriCorps supervisor for the Iowa Department of Natural Resources Keepers of the Land Volunteer program.

Shelly received her AA from NIACC and BS in Psychology and Sociology from Upper Iowa University.