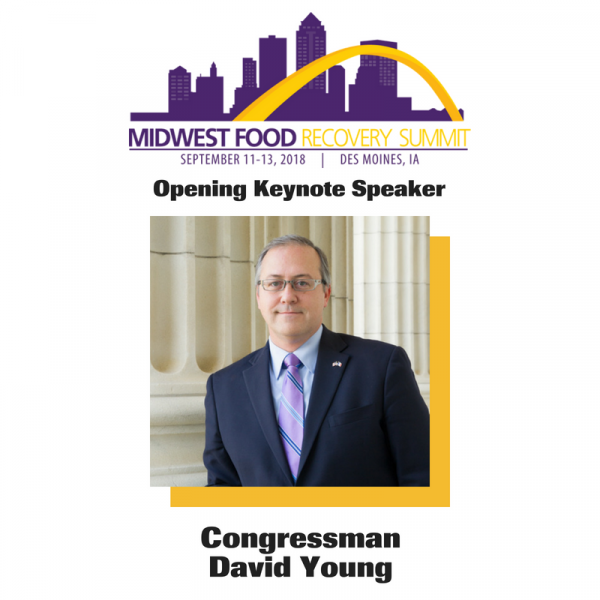 We are excited to announce that Congressman David Young, who represents the 3rd District of Iowa, will be the opening keynote for the 2018 Midwest Food Recovery Summit.

The congressman will be highlighting strategies to address food waste. “Earlier this year, Representative Young was part of the team that launched the bipartisan House Food Waste Caucus to focus on reducing food waste reduction and recovery. Here at the IWRC, we were excited to have someone in the Midwest at Congressman Young’s level be involved in the discussion nationally and are looking forward to having him share his insight with everyone at the Midwest Food Recovery Summit,” says Dan Nickey, Interim Director at the IWRC.

Along with launching the caucus in April, Representative Young was also involved in the food waste round table discussion held by Agriculture Secretary Perdue in May 2018. In a press release from the congressman, he says, "Today's discussion was the next step in working to stop food loss and waste at every step in the food chain. Forty percent of our nation's food supply is wasted and we must confront this issue at farms, grocery stores, restaurants, schools, and every step in between. I don't just want something to do, I want to do something which will create a meaningful change which reduces food waste and combats hunger."

The congressman's opening keynote address will take place on September 11, 2018, in Des Moines, IA, followed by two and a half days of breakout sessions, special events, plenary discussions, and networking all centered around food waste reduction, recovery, and recycling. For more information and to register, visit mwfoodsummit.com.