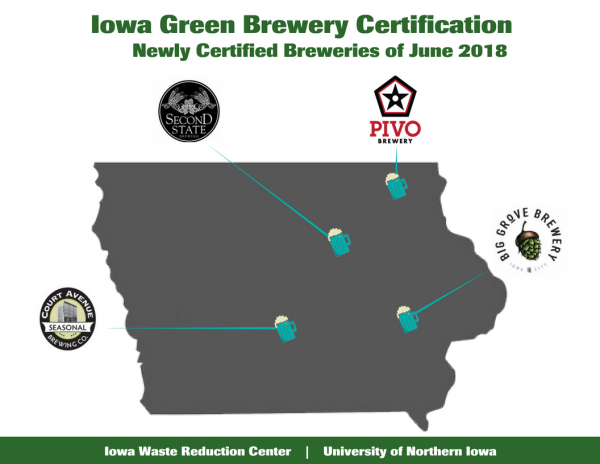 The certification was launched in 2016 as a way to bring hands-on environmental assistance to the growing industry. Breweries are awarded certification levels of bronze, silver, gold, or platinum based on their sustainability efforts.

IWRC staff didn’t have to travel far for June’s first certification at Second State Brewing in Cedar Falls. They earned a gold certification for their focus on energy efficiency, use of reclaimed materials, and their overall sustainability efforts. Specifically, features like their reclaimed bowling alley tables, energy-efficient coolers, and use of LED lighting throughout the space contributed to their awarded gold certification.

In the upper northeast of Iowa, a silver certification was presented to PIVO Brewery in Calmar.  PIVO’s overall focus on sustainability and waste reduction contributed to their silver level certification. One sustainability measure they’ve implemented is tracking their wastewater. This allows them to see exactly how much they are using and reduce the waste they generate.

Big Grove Brewery & Taproom in Iowa City was also awarded a gold certification this month. Their overall focus on solid waste management and energy efficiency contributed greatly to their rank as well as efforts like installing permeable pavers in their outdoor area for stormwater control and planting over 100 trees on their property.

To round out the month, Court Avenue Restaurant and Brewing Co., or CABCo, was awarded a bronze certification. CABCo is the 10th Iowa craft brewery to join the program and the first from the Des Moines metro area. They achieved their bronze certification by their recent recycling expansion and diversion of spent grain going to the landfill, instead, it is used by a farmer as feed.

Joe Bolick, manager of the Iowa Green Brewery Certification says, “All these breweries have been an absolute joy to work with. Through this certification program, we are able to work individually with these businesses and help them in the process of becoming more sustainable. It’s great to be able to direct each one of them in achieving their environmental goals.”

Congratulations to these newly certified breweries and welcome to the Iowa Green Brewery Certification program!